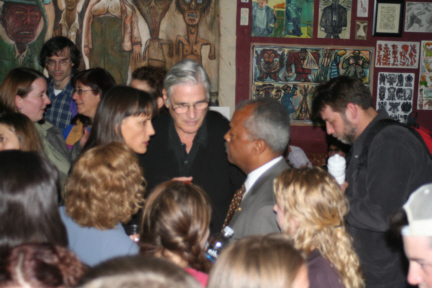 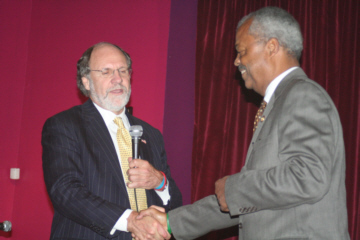 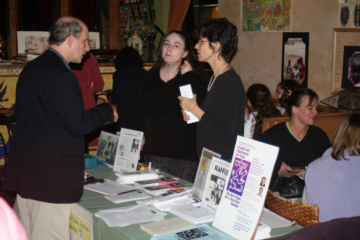 People were able to RSVP through an E-vite link. 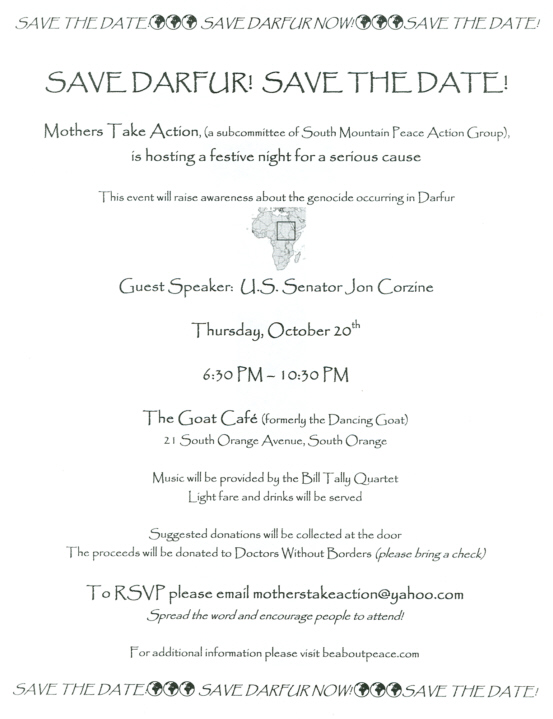 As many of you may know, Mother's Take Action is a small group of mothers in South Orange/Maplewood who are concerned about injustice in the world. Our first action is to address the humanitarian crisis occurring in Darfur, Sudan. As peace is the ultimate goal in Sudan, we have joined forces and have become the Darfur Committee within SMPA.

Following the genocide that occurred in Rwanda in 1994 world leaders vowed that genocide would never happen again. Well, it is happening! A state-sponsored campaign of racial extermination is occurring in the Darfur region of Sudan. Since 2003, the Sudanese government-sponsored Janjaweed militia -- using rape, displacement, organized starvation and mass murder -- has killed almost 400,000, and displaced more than 2.5 million, and it continues to kill at least 6,000 Darfuris each month. The militias burn and bomb villages, systematically rape women and young girls, abduct children and destroy food and water supplies. Kofi Annan called the conditions in Darfur: "little short of hell on earth."

Some of you may have read Nicholas Kristof's recent N.Y. Times article "A Wimp on Genocide." He wrote: "I'm a broken record on Darfur because I can't get out of my head the people I've met there. On my very first visit, 18 months ago, I met families who were hiding in the desert from the militias and soldiers. But the only place to get water was at the occasional well -- where soldiers would wait to shoot the men who showed up, and rape the women. So anguished families sent their youngest children, 6 or 7 years old, to the wells with donkeys to fetch water -- because they were least likely to be killed or raped. The parents hated themselves for doing this, but they had no choice -- they had been abandoned by the world."

There is much to say about the crisis, and much to do to instigate change, but right now I am simply asking you to save a date for us. We are planning a fundraiser for Doctors Without Borders, an organization doing exceptional work in the Darfur region.

Despite the gravity of the situation, the fundraiser is being designed to be a fun night. It will be held at the terrific cafe/art gallery/music club The Goat Cafe in South Orange. There will be wine and beer, as well as appetizers from local restaurants. We are working on some pretty amazing entertainment (jazz) and we have a special guest star speaker: U.S. Senator Jon Corzine.

Thank you and look forward to seeing you at the event!

Concerned women from Maplewood & S Orange have formed a group to raise public awareness on the genocide taking place in Darfur. Email motherstakeaction@yahoo.com

Governor Corzine spoke at the Maplewood Train Station on Sunday April 23, 2006 at a gathering about the Save Darfur Rally in Washington DC on Sunday April 30th. Lots of information about local buses going to DC. Sponsored by Pen & Jen and Mothers Take Action