South Mountain Peace Action is a community organization based in the towns of Maplewood and South Orange, New Jersey. We've been working for peaceful alternatives to war and changing our national priorities to reduce excessive military spending and increase resources for human needs and the environment, since the 1960s. We're an independent organization that supports the goals of New Jersey Peace Action in Bloomfield, NJ, which is part of national Peace Action in Washington, D.C.

South Mountain Peace Action honors the United States Constitution and we carry out our actions and advocacy work in accordance with its principles. We uphold the values of the United Nations Charter and the Declaration of Human Rights, as well as the the philosophy of peaceful change, as exemplified by Dr. Martin Luther King, Jr.

South Mountain Peace Action engages in multifaceted forms of public education and political action. We circulate flyers and petitions, hold public meetings and demonstrations, organize phone calls, emails, letter-writing and delegations to our elected officials. We also distribute lawn signs, posters, buttons, car magnets and T-shirts with the "Be About Peace" message and graphic designed by Jackson Roberts of Maplewood.

Since 2005, South Mountain Peace Action has organized an annual "Be About Peace Day" consisting of an afternoon of arts and crafts for peace and an evening program of music and reflection. In June 2007, Cities for Peace/Cities for Progress featured a template of SMPA's Be About Peace Day as a model for cities and towns across the country.

If you share our goals and values please give a call or send an email to South Mountain Peace Action's chair, Paul Surovell

Late 1950s -- Citizens of Maplewood and South Orange were involved in the formation of the Committee for a Sane Nuclear Policy (Sane) a national organization calling for the abolition of nuclear weapons and testing.

1960s and 1970s -- Worked for the abolition of nuclear weapons and nuclear testing; opposed the Vietnam War. Had a storefront on Maplewood Avenue. Group called itself the Peace & Community Action Center and was affiliated with New Jersey Sane, which was affiliated with national Sane (The Committee for a Sane Nuclear Policy).

1980s -- Participated in the Nuclear Freeze Campaign, a state and national effort to achieve a bilateral US-Soviet freeze in the production, deployment and testing of nuclear weapons. Supported a Comprehensive Test Ban Treaty to ban all testing of nuclear weapons. Initiated resolutions by the Maplewood Township Committee in support of a US-Soviet Nuclear Freeze and a Comprehensive Test Ban Treaty. Opposed US support for the Contras in Nicaragua.

We changed our name to South Mountain Sane.

1990s -- Supported Abolition 2000, a national campaign to abolish all nuclear weapons and use the funds for human needs. Supported economic sanctions as an alternative to military action in Iraq, but opposed the use of economic sanctions that resulted in the deaths of perhaps 500,000 Iraqis, mostly children. Opposed the bombing of Yugoslavia.

2000s -- Continue to support the abolition of all nuclear weapons. Initiated petition drive and resolution by Maplewood Township Committee to refrain from acts of war against Iraq and continue UN weapons inspections. Distributed 1,200 "Be About Peace" lawn signs in Maplewood and South Orange. Circulated petition for an international solution in Iraq led by the United Nations and delivered petition to Senators Corzine and Lautenberg and Congressmen Payne and Pascrell. Held first Be About Peace Day on the second anniversary of the war in Iraq. 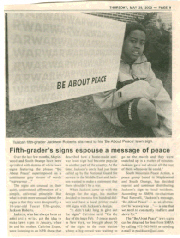