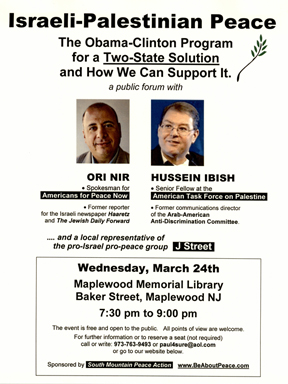 -- How will the current US-Israeli crisis be overcome?

South Mountain Peace Action is sponsoring a public forum to answer these and other questions.

The Obama-Clinton Program
for a Two State Solution and
How We Can Support It.

We are privileged to have speakers who are leading experts on the Israeli-Palestinian peace process:

Ori Nir, spokesman for Americans for Peace Now, spent years on the West Bank as a reporter for the Israeli daily newspaper Haaretz. Ori is an expert on Israeli politics and Israeli settlements in the West Bank and Jerusalem and on how they would be affected by the creation of a Palestinian state.

Hussein Ibish is senior fellow at the American Task Force on Palestine. Hussein is a former communications director of the Arab-American Anti-Discrimination Committee. He is an expert on Palestinian perspectives on a two-state solution and how the issues of borders, refugees and militarization should be addressed.

Debbie Schlossberg is leader of the central NJ branch of J Street, the dynamic new pro-peace pro-Israel group, which recently organized a Congressional visit to Israel and the West Bank that included Maplewood's Congressman Donald Payne. We hope to present a report from the Congressman at the forum.

-- These talks will hopefully lead to direct negotiations to provide the framework for Israel and a Palestinian state to live in peace, security and cooperation, and to enable Israel to establish normal diplomatic and commercial relations with the Arab world.

-- President Obama and Secretary of State Clinton are holding firm on demands that Israel agree to reverse its order to build new settlements in East Jerusalem and General Petraeus has spoken on the need for a peace agreement.

-- Two weeks ago, after Israel declared two religious shrines on the West Bank to be part of Israel's national heritage sites, Palestinian PM Fayyad responded "This is a provocation but we will not respond with violence."

-- In its March 5, 2010 edition, The Jewish Forward newspaper launched a major series on the two-state solution, saying "it is perhaps the most salient policy issue before the Jewish world today."

-- In June, Israeli PM Netanyahu has endorsed for the first time the creation of a Palestinian state in addition to declaring a partial settlement moratorium which the Obama administration called a good "first step."

Our speakers will discuss these and many other issues and perhaps most important, suggest ways that local residents can become involved themselves in the peace process.

Ample time will be set aside for audience questions and comments. All points of view are welcome and respectful dialogue is encouraged.

If you have any questions or would like additional information or materials please call or write at 973-763-9493 or paul4sure@aol.com.

Click for statements on Two-State Solution by Obama, Clinton, Netanyahu and Abbas.

The meeting comes after more than a year of diplomatic efforts by President Obama's special representative to the Middle East George Mitchell which most observers believe have resulted in the partial freeze on Israeli settlements by Prime Minister Benjamin Netanyahu and his conditional endorsement, for the first time, of a Palestinian state. Although Palestinian leaders have called these moves insufficient, the terms of the debate have changed from: whether there should be a settlement freeze and a Palestinian state, to: how much of a freeze and what kind of a Palestinian state should there be?

In their presentations, Nir and Ibish will discuss the status of the Israeli-Palestinian peace process and diplomatic efforts by the Obama administration to facilitate a two-state solution. They will focus on President Obama's call for a total freeze on Israeli settlements and better security in Palestinian areas and on the Israeli and Palestinian responses. Nir and Ibish will discuss programs of their respective organizations, Americans for Peace Now and the American Task Force on Palestine, on behalf of a total settlement freeze and a two-state solution that establishes a Palestinian state and provides security guarantees for Israel. The speakers will also discuss how APN and ATFP support peace advocates in Israel and Palestine and how they make their views known to the White House and Congress. After the speakers' presentations, audience members will have the opportunity to ask questions and comment. All points of view and respectful dialogue are welcome.

"For the first time in a decade, a US President has made peace between Israel and Palestinians a priority of his administration. In addition to their insights into the dynamics of the peace process, Nir and Ibish will discuss how citizens can contribute to the peace process by providing feedback on the administration's program. The J Street representative will also suggest ways to support peace," said Paul Surovell, chairman of South Mountain Peace Action of Maplewood and South Orange, NJ, which is sponsoring the meeting.

"For decades the Israeli-Palestinian conflict has inflicted great hardship and suffering on the Israeli and Palestinian people and it has been exploited by extremist ideologies and demagogues throughout the Middle East and beyond. A just resolution of the conflict based on the creation of a Palestinian state would defuse the influence of these ideologies and demagogues, particularly in Iran. Thus the goal of a two-state solution for Israel and Palestine should be a priority for those seeking a more peaceful Middle East and beyond."

"We are very excited that residents of Maplewood and South Orange will have the opportunity on March 24th to hear about these important issues from Ori Nir and Hussein Ibish who are world-class experts in this area," Surovell added.

For further information about the forum and to reserve a seat (not required, but recommended) please call Paul Surovell at 973-763-9493 or email him at paul@beaboutpeace.com. 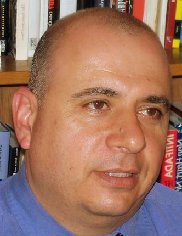 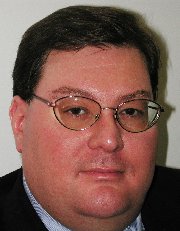 Click HERE for articles by Ori Nir and Hussein Ibish and statements by President Obama. 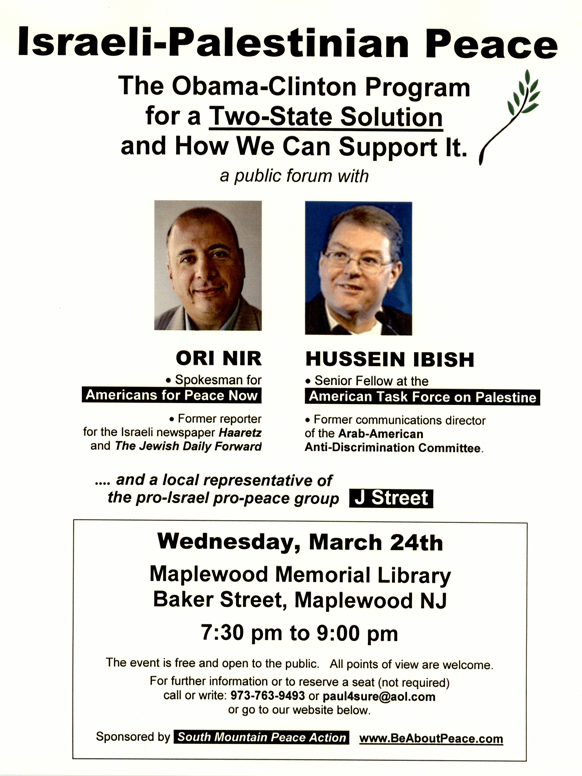