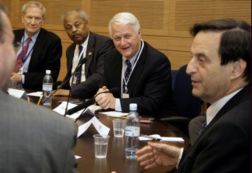 Feb 19, 2009 -- I've just landed in the US following an exhilarating week leading a delegation of five members of Congress to Israel, Jordan and the Palestinian Authority. [1]

The trip, sponsored by the J Street Education Fund, exposed key friends of Israel in Congress to complexity on the ground, to divergent opinions and to first-hand controversy.

The Delegation visited Jerusalem, Ramallah and Amman, meeting with politicians in and out of government. We dined and debated with civil society leaders in Israel, Jordan and the Palestinian Authority. We heard the first-hand powerful narratives of Israeli settlers, families in Sderot, human rights activists, Gilad Shalit's father, and descendants of Palestinian refugees.

With one notable exception - as you may know, we were placed under a so-called "boycott" by Israeli Deputy Foreign Minister Danny Ayalon. On the heels of telling the Conference of Presidents of Major Jewish Organizations that J Street should stop calling itself something it's not (i.e., "pro-Israel"), Ayalon leaked to Israeli media word of a boycott of the group, supposedly preventing us from meeting with Israeli officials. [2]

Needless to say, the members of Congress were none-too-pleased, holding a press conference to express their shock and issuing a statement demanding clarification from the Government. [3]

For many - from Israeli political insiders and media to American Jewish leaders and politicians - this incident was just the latest in a series of indications that the Foreign Ministry in this Government is less an open front door to Israel than a checkpoint for ideological purity.

This week's spat between the Ministry and our Delegation deepens concerns about the increasing inability of some in Israel and in the US to distinguish between criticism of or disagreement with Israeli policy and outright hostility to the state itself. [4]

The more supporters of Israel put themselves in a defensive crouch, lashing out at the slightest hint of criticism, the less meaningful their entreaties will be when the threats are real and the enemies truly lethal.

Thankfully, within twenty-four hours, the Government in this case backtracked, apologizing to the Delegation. (See Jerusalem Post and Haaretz coverage of yesterday's apologies). [5, 6]

We heard dramatically varying views on the state of American diplomacy - with some unsatisfied with the tactics, pace and results of the Mitchell effort to date, and others expressing great confidence in Senator Mitchell and highly appreciative of his patience, experience and skills.

The diversity of opinions is remarkable; the depth of passion unmistakable.

But I take away from the whole experience a troubling sense that beyond any particular issue of the moment - beyond Iran, Goldstone, Jerusalem, settlements, or Danny Ayalon - there is a fundamental conflict rising up to face the Jewish people as a whole.

There is in our community - and by that I include the whole of world Jewry as one people from Israel to the US and around the globe - a struggle developing between two camps with radically different visions of Jewish expression in the 21st century.

On one side of this struggle are those committed to our vision of time-honored Jewish and democratic values - grounded in respect for "the other," a tolerance for dissent, and a willingness to sacrifice territory for peace.

On the other side are those who seem willing to muffle dissent, view all conflict as zero-sum, and place retaining captured land and territory at the center of its value system.

For a while now, it has been popular to say that for Israel there is a choice ahead between the land, being Jewish, and being democratic. Many leading Israelis have come to see that it's possible only to have two of the three.

I think the choice for world Jewry is similarly profound and stark. As a people - do we line up with those who seek to hang on to all of "Greater Israel" and watch our Jewish and democratic values erode in Israel and in our community, or do we stand up urgently for territorial compromise and for behavior in Israel and in our community that reflects our cherished and long-held values?

More than ever, it's clear to me that we're not fighting simply over Israeli or American foreign policy. We're in a larger and more significant battle over who we are as a people in this new century and how our people are defined collectively for ourselves and for others by the behavior of the country that serves as our national expression.

We'll be in touch,