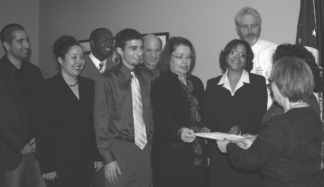 A delegation of civic and student leaders from Maplewood and South Orange NJ, presented a letter on Oct. 27, 2005, to representatives of New Jersey Senators Jon Corzine and Frank Lautenberg, urging them to co-sponsor the Feingold Resolution, which calls on the President to declare an exit strategy from Iraq.

South Mountain Peace Action coordinated the effort, which followed a letter to Senators Corzine and Lautenberg from SMPA in June 2005.

The letter presented to the Senators' representatives was signed by: 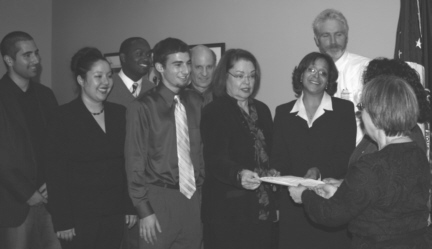 The letter reads as follows:

Maplewood and South Orange recently experienced the loss of a beloved former member of our community who was killed in Iraq.

This painful tragedy has been repeated nearly 1,900 times across the nation, and there is no end in sight.

The war in Iraq has cost New Jerseyans more than $9 billion, and the citizens of Maplewood and South Orange alone more than $62 million.

The Katrina disaster reminds us how much of our nation's National Guard is far away in Iraq, unable to respond to emergencies and protect local life and property.

We believe the time has come for the President to announce an exit strategy to put our country on a course toward ending this war.

Senator Russell Feingold of Wisconsin has proposed a Resolution (S. Res. 171) that would urge the President to submit a statement of the remaining mission of the United States in Iraq, estimates for the timeframe to achieve that mission, and a timeframe for the subsequent withdrawal from Iraq.

New Jersey and the nation need your leadership to help our country begin to bring our military involvement in Iraq to a conclusion.

Writing as private citizens, we urge you to join Senator Feingold as co-sponsors of his Resolution.