South Mountain Peace Action's Be About Peace Day -- A Local Call for Peace on the Second Anniversary of the War in Iraq -- took place in two Parts on Saturday March 19, 2005:

(2) Meeting, Concert,Candlelight Vigil and Peace Memorial Dedication from 7 to 10 pm at the Ethical Culture Society house at 516 Prospect Street, Maplewood.

Scroll down the articles on the "Previous Events" page on this website to see photos of all the activities of March 19th. 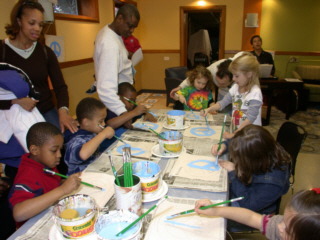 Here's a summary of the day's events:

AFTERNOON IN THE LIBRARY

Arts and Crafts for Peace in the Library attracted more than 300 children and adults, who made arts and crafts projects expressing the theme of peace. One of the projects -- painted tiles, was installed in the peace memorial at the evening event at Ethical Culture.

The trio of Bill Talley on the keyboard, Jim Buchanan on base and Pewri on guitar performed wonderful music for the first part of the afternoon.

We had 9 crafts tables plus a drama space, which were all enthusiastically received, by children and adults. The crafts included: hand-casting, beading, quilting, door-hangers, posters, T-shirt painting, origami, tile-painting and pottery.

Every table was a bee-hive of activity, with kids and adults working diligently at their projects.

On the side we were distributing "Be About Peace" lawn signs, T-shirts and SMPA buttons with our logo of the peace dove with a Maple Leaf.

We raffled several items throughout the afternoon.

We started cleaning up about 4:30 and by 5:00 the place was clean and the Underground music series had begun.

We were joined during the afternoon by Township Committee members Ian Grodman and Kathy Leventhal, as well as former Mayor Vic De Luca, who was on the "crew," helping with the raffle and the sign-in table.

At least 100 people participated in the evening event at Ethical.

"Every gun that is made, every warship launched, every rocket fired, signifies in the final sense a theft from those who hunger and are not fed, those who are cold and are not clothed."

CHS student Dan Symonds introduced the CHS band, "The Buzzards of Greenhill"
who played three original songs and Buffalo Springfield's "For What It's Worth."

Judi Kramer then read poems by students of Holly Scalera, who was not able to attend.

Cathy Casriel read a poem by Iraq war veteran Jose Diaz and one of her own.

At this point, the program called for Vic De Luca to moderate a public forum, but Congressman Donald Payne arrived in a surprise appearance. Congressman Payne spoke for about 20 minutes and then answered questions for about 45 minutes.

We moved outside to dedicate our peace memorial that was conceived and designed by Holly Scalera, with help from Marshall Norstein, caretaker of the Ethical Society. The tiles of the memorial were painted and written on by children during the afternoon at the Library.

Holly was home with a high fever, so her husband Tomm (who also designed our Be About Peace Day poster) and Marshall took charge of the peace memorial installation.

We convened outside and Agnes Brophy distributed candles to everyone.

SMPA secretary Mary Gallagher read the names of the New Jersey servicemen who have given their lives in Iraq, and she dedicated the peace memorial to them and to the Iraqi civilians who have died, as well as to Betty Duffey, former SMPA co-chair who died about 2 weeks ago.

We doused our candles and went home into the night, reinvigorated and rededicated to peace after a long, but positive and uplifting day.

Scroll down the articles on the "Previous Events" page on this website to see photos of all the activities of March 19th.

This sounds like a great event. Do you have to buy tickets?